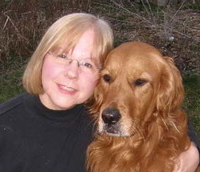 www.mainehomeopathicvet.com
Judith graduated from the College of Veterinary Medicine at Michigan State University in 1977. She practiced at a progressive small animal hospital outside of Boston for 12 years before moving to Maine. In 1993 she began seriously studying homeopathy with Dr. Richard Pitcairn - a well known veterinary homeopath, who has been teaching veterinarians classical homeopathy since the early 1990's. Dr. Pitcairn founded the Academy of Veterinary Homeopaths, and is author of "Complete Guide to Natural Heath for Dogs and Cats".

In 1994 Judith finished the Professional Introductory Course in Veterinary Homeopathy and then became certified in veterinary homeopathy in March of 1996. She completed the Advanced Course in Veterinary Homeopathy in 1998. Judith continues to study with Dr. Pitcairn to this day. In addition to course work through the Animal Natural Health Center, Judith is also studying with Dr. Andre Saine, founder of the Canadian Academy of Homeopathy, and with David Little - a homeopathic practitioner in India who is a highly respected, international scholar in classical homeopathy.

Judith opened the Animal Wellness Center in the spring of 1995, which focuses on the holistic approach to animal care and behavior with an emphasis in homeopathy.

In 2001 Judith became a board member of the Academy of Veterinary Homeopathy and held the position of president in 2003. She is the chair of the certification committee, which is the only certifying body for veterinarians in homeopathy in North America.

Judith was a speaker at the 2000 Academy of Veterinary Homeopathy’s national conference; lectured at the University of Illinois College of Veterinary Medicine in 2003; and lectured at ReMaine Wildlife State Conference for wildlife rehabilitators. She's also lectured at the Common Ground Fair, Gardiner and Waterville adult education, Avena Botanical Institute, and various kennel clubs, avian clubs, dog training clubs, and other half-day seminars.

She has been published in the Journal of the Academy of Veterinary Homeopathy and the Journal of American Holistic Veterinary Medical Association and has a featured column in the magazine, Maine Food and Lifestyle.

Judith is a board member for Avian Haven of Freedom, Maine and is the homeopath for several animal nonprofit organizations. She is the founder of the Companion for Life Program, which enables the terminally ill, victims of domestic violence and shut ins keep their companions. She is also the founder of Animeals, which helps feed animals owned by Meals on Wheels recipients .

Judith is also an avid gardener, and artist. She lives in Gardiner, Maine with her Golden Retriever, Bryan, and her cat, Danny.